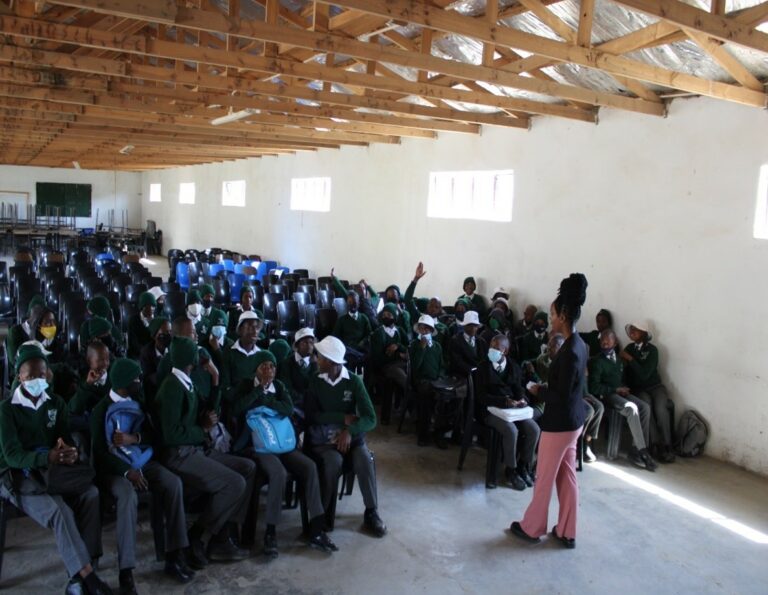 A two-day retreat for 175 boys from Lesotho’s Motsekuoa High School provided an opportunity to learn, as well as share opinions, feelings, and thoughts on a variety of issues including leadership, good hygiene and sexual and reproductive health and rights.

“The retreat, which took place in September, provided boys with the opportunity to establish lifelong friendships and develop their problem-solving skills in a safe environment,” said FutureLife-Now! health coordinator, Puleng Nthinya. She added that the main aim of the retreat was to empower boys with the skills, knowledge and attitudes necessary to make positive decisions about their lives.

He said that the learners were therefore more likely to drop out of school during this time. “They use the excuse that they will be going to initiation school instead, and then we don’t see them again,” he explained.

One of the highlights of the retreat was the talk given by Lefa Pitso, a father who has sons at the school. He is also a traditional leader who owns initiation schools. He told the boys that he is sometimes embarrassed by the behaviour of some of boys who attend the initiation school. “Their behaviour is not what we teach up in the mountains. I ask that you all behave like leaders, so that other young men can learn from you.” He encouraged the boys to finish their formal schooling. “Only once you have finished your schooling and written your final exams, should you come to initiation school. Don’t interrupt your studies.”

At the end of the workshop, the boys pledged to change their behaviour and not to succumb to pressure from their peers to engage in risky behaviour. They also pledged to be responsible future fathers.

The response to this initiative has been nothing but positive, says Rantsane Kuleile, FutureLife-Now! country manager in Lesotho. “Opportunities for these boys to talk and to be involved in the decision-making process at home, in schools and in the community at large, including being part of political leadership needs to be encouraged. More boys need to be empowered to become involved in all spheres of life.” He added that future plans include focusing on those who are out of school and encouraging them to come back and finish their schooling.