Change is Here to Stay || Lesotho’s FutureLife-Now! schools reflect on the first two years of the pilot project

Two years after the 2019 launch of the FutureLife-Now! programme in Lesotho, the time had arrived for a formal reflection. Produced at the end of 2021, the aim of the reports from all 10 outreach schools was to reflect on the objectives that the FutureLife-Now! programme had met in relation to its goal of reducing new HIV infections and increasing adherence to ART amongst youth in the SADC Region. 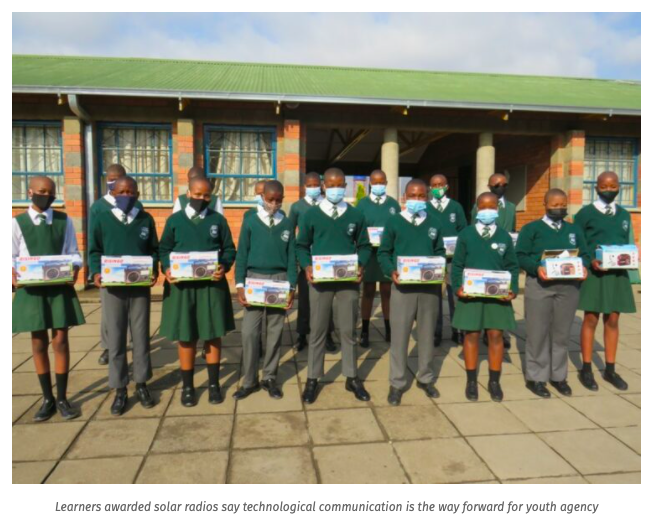 The reports from all ten outreach schools stated that through the availability of e-platforms in schools (laptops, screens and projectors) learners have become acquainted with different virtual platforms such as Zoom, Microsoft Teams and Google Meet, which were mostly used for interschool webinar dialogues in order to discuss an array of topics.

“Students showed confidence and learned a lot from their counterparts,” said Victoria Kente, principal of St Saviours High School. “This sparked excitement amongst learners and later, they all wanted to be part of the discussions.”

Tsoanelo Seboka, principal of Thetsane High School also indicated that these information and communication technologies (ICT) have become teaching aids which support teachers in promoting quality 21st century education for agency. “ICT had an impact on students as it raised their interest during lessons, and allowed them to engage with peers from other schools. It also created an increase in the knowledge and skills of students and teachers in using ICT equipment for teaching,” said Seboka.

When it comes to promoting linkages between health and education, Seboka added that benefits linked to ICT include the ability to now track referred cases for support, the creation of a standard referral tool, and follow up for learners through improved communication between school and health facilities.

Sister Anna Mokhoro, principal at Semonkong High School, stated that the programme has strengthened partnerships between the school and the nearby clinic.  St. Saviours’ principal Kente added, “The working relationship between our school and local health facility has improved remarkably.” 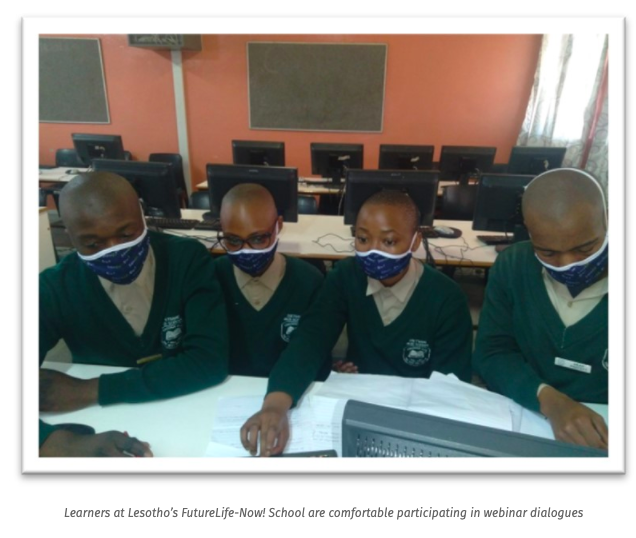 These successes were also reflected in the reports of the other pilot schools which agreed that through FutureLife-Now! learners are now receiving immediate medical care from nearby health facilities and go on their own to health facilities to access information and services.

Regarding climate change, reports reveal that all 10 schools appreciated the capacity building training that teachers received on climate change, the “Blue School Kit” technologies and smart climate agriculture, as well as webinar dialogues for learners.

This finding was echoed at St. Saviours High School where Kente said, “The school grew vegetables in the garden, and forest trees as well as fruit trees were planted to enhance the environment and scenery.”

All schools showed positive impacts from other programme components such as radio talk shows, incentives to schools, peer education sessions by youth facilitators, journaling, and boys’ vulnerability dialogues which they say have contributed towards some behaviour change and communication improvement amongst learners.

“Lessons from radio and peer education sessions given to adolescents were easy and important for them since they were addressing issues of sexual and reproductive health and rights, gender-based violence, self-esteem, youth agency and climate change,” said principal Nyakane.

In conclusion, Wesi Lebuso, St. Barnabas High School principal, says with the same enthusiasm as his peers from the other nine pilot schools, “The FutureLife-Now! programme has brought hope to schools, and the benefits to both teachers and learners are far reaching. However, still more needs to be achieved in 2022 through exploring more opportunities and ensuring involvement of communities in the attainment of the goals of the programme.”

The year 2022 starts off on an exciting note for MIET AFRICA. A regional research study on youth...

Last year, as schools in Zimbabwe prepared to close and everyone looked forward to the festive...

Hoes, trowels, and fertilizers were just some of the items that found their way to the...

Change is Here to Stay || Lesotho’s FutureLife-Now! schools reflect on the first two years of the pilot project

Two years after the 2019 launch of the FutureLife-Now! programme in Lesotho, the time had arrived...

Of the many exciting activities supported by FutureLife-Now! at Naboye Secondary School in Zambia’s...

REPORT | Gains and Losses for Care and Support in a COVID-19 Era: Findings of a Rapid Evaluation of CSTL in South African Schools

Since its adoption by SADC Ministers of Education in 2008, the Care and Support for Teaching and...

MIET AFRICA, in partnership with the Department of Basic Education in South Africa, the National...