What do boys and young men need? The best way to find out is to ask them!

This is precisely what happened at the boys’ vulnerability dialogue sessions at Ngowe and Natola Community Day Secondary schools in Malawi, on 22 and 25 June, 2021.

The sessions were organised by the FutureLife-Now! programme in its quest to include young boys and men in programmes in an attempt to address the impact of gender disparities in society. 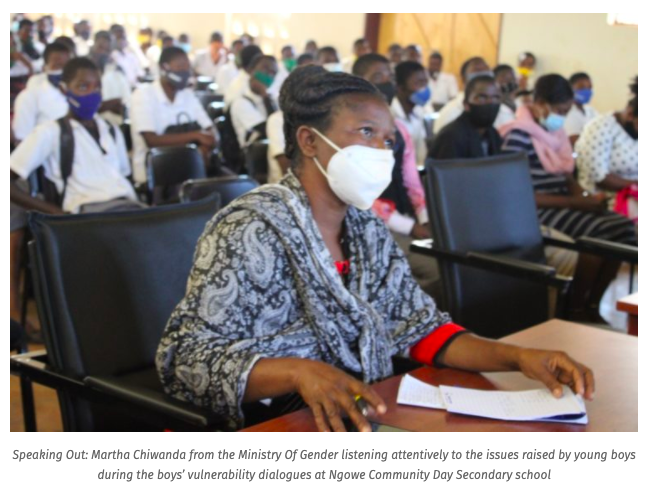 “There is an urgent need to strengthen the engagement of boys and young men concerning the support for gender equality and female empowerment, as well as to address their own specific social, emotional, and developmental needs,” said Croxley Nkhoma, Malawi’s FutureLife-Now! Country Manager, “Yet, despite a growing awareness among SADC Member States for the need to involve and support boys, the reality is that they are seldom targeted. It is imperative that we accelerate action towards SDG goal 5 – gender equality – to advance the wellbeing and health of young people across and beyond the SADC Region.”

These sessions were the first of many more that will be held in the near future. The main objectives of the boys’ vulnerability dialogue sessions are to highlight challenges faced by adolescent boys in different communities across Malawi and in different regions across the world, share best practices, and inspire action to address these challenges.

The two hour dialogues, first at Ngowe on 22 June and three days later at Natola Community Day Secondary school, were both presided over by the Ministry of Gender and attended by representatives from the Ministry of Education, Children, Disability and Social Welfare, the Ministry of Youth and Sports and the Ministry of Health. There were 169 young people in attendance at Ngowe, and in Natola 209 learners attended the dialogue.

In both instances, the school halls had been decorated by young girls and boys who sat a meter part, in line with COVID-19 protocol. Above their masks, their eyes shone with excitement as they looked forward to the long-awaited boys’ dialogue. In the front, two team of boys, five boys per team, were separated by a moderator ready to commence the dialogue. There was a hushed silence in the hall as the boys expressed themselves freely without fear of being ridiculed. Said Nkhoma, “It was the first time for many people in the room to watch the narrative of male invincibility being challenged.”

One young man said: “A lot of people think boys don’t cry, but we do. We have feelings and needs too. Growing up we are discouraged to express our feelings and told mamuna salila (boys don’t cry). This makes us refrain from asking for help and forces us to deal with things alone which could be the main reason there are high suicide rates amongst men in Malawi.”

The dialogues also revealed that a lot of young boys are victims of sexual abuse and harassment.  However, they are afraid to report these cases because authorities refuse to take the matter seriously and rely on stereotypes. One boy reported that authorities will say: “What do you mean you were raped? Men don’t get raped.” He added that these sexist views are also reflected in Malawi’s constitution as it does not recognise men and boys as victims of rape.

There was a roar of applause at Ngowe Community Day Secondary school when one of the students advised the Ministry of Education to have a mindset change and change the perceptions that reinforce gender stereotypes. He said, “In our textbooks, you only use female animation for professions like nurses. You need to change that because boys can be nurses too and girls can also be mechanics. We need to see that in our textbooks.” 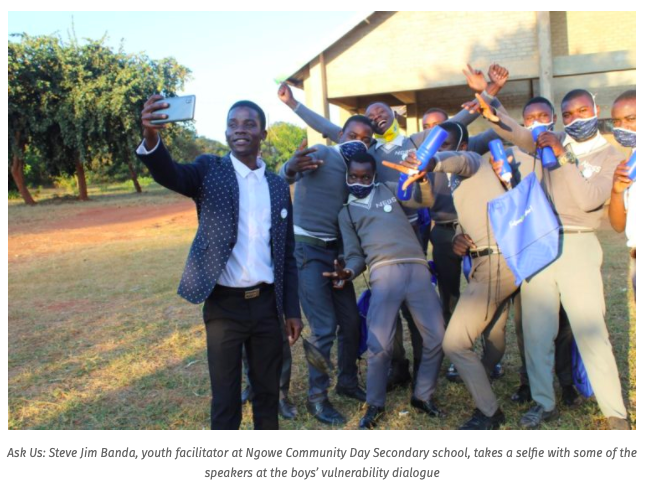 Nkhoma added, “Patriarchy dehumanises men as well as women. It creates a toxic masculinity which strips them of the dignity to speak and express themselves unless it’s through anger and aggression.”

In all the dialogues held so far, the need for clubs that will act as safe spaces for boys to share their experiences has been voiced. “It is important that the issues to do with boys’ vulnerability are handled and approached with the sensitivity they deserve. We intend to do this through the FutureLife-Now! Boys’ Vulnerability Framework and boys clubs shortly,” said Nkhoma.

The FutureLife-Now! programme plans to host more of these dialogues in order to help create a context-specific Boys’ Vulnerability Framework which will be centered on the evidence-based needs of young boys and men.

Report Launched! | The Impact of Covid-19 on Young People and Adolescents in the SADC Region

The impact of COVID-19 will have an irreversible effect on progress that has been made if...

We are Keen to Go Green! | Zimbabwe’s Murape Learners Put Their Backs Into Greening Their School and Community

Youth participation in community development is one of the most effective ways to promote young...

What do boys and young men need? The best way to find out is to ask them! This is precisely...

Three days of intensive interactions has significantly strengthened the linkages between Lesotho’s...

Mwembeshi Boarding Secondary school is a role model for all schools in Zambia in terms of its...

Guide for Operationalising Care and Support for Teaching and Learning in Schools in the SADC Region Out Now!

This guide was developed by MIET AFRICA to guide SADC Ministries of Education and their schools in...

Learnings from What We’ve Done and How We Did It || Learning Briefs Out Now!

Even before the COVID-19 pandemic, sub-Saharan Africa was at risk of not achieving the Sustainable...