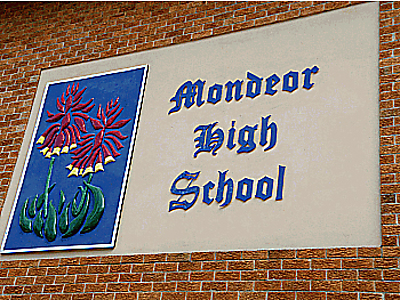 We have, for many years, had a 90%+ matric pass rate and a wide range of distinctions. The majority of our departments are well above the Gauteng average.

Mondeor High School's Matric Dance is a glittering affair held in our very own school hall (or lately at an outside venue - as the school hall is too small). Within one week, Mrs. Nicolaou, Educators and Grade 11's transform the hall from a practical meeting place into a fantasy land where the matric's dreams come true.

Principal not Racist.(Ex Learners vouch for her)

Johannesburg - Former pupils and supporters of a Joburg high school principal have come to her defence over alleged racism claims at the school.

This was after some parents at Mondeor High School expressed outrage that racially charged remarks were allegedly made at the school’s assembly last week.

According to The Star’s sister paper, the Saturday Star, several pupils at the school accused the principal, Vangelia Nicolaou, of allegedly telling black pupils they were “blackening the name of the school”.

The pupils said this came after Tuesday’s Matric Day at the school, during which many of them were involved in throwing water in buckets and eggs at each other in what they claim is an annual tradition at the school to bid farewell to matriculants.