Malawi’s First Lady Madame Monica Chakwera, who presided over the handover ceremony, said   the gesture comes amid Ministry of Education's report that 75 per cent of learners that deserve secondary education fail to access it due to shortage of secondary schools. 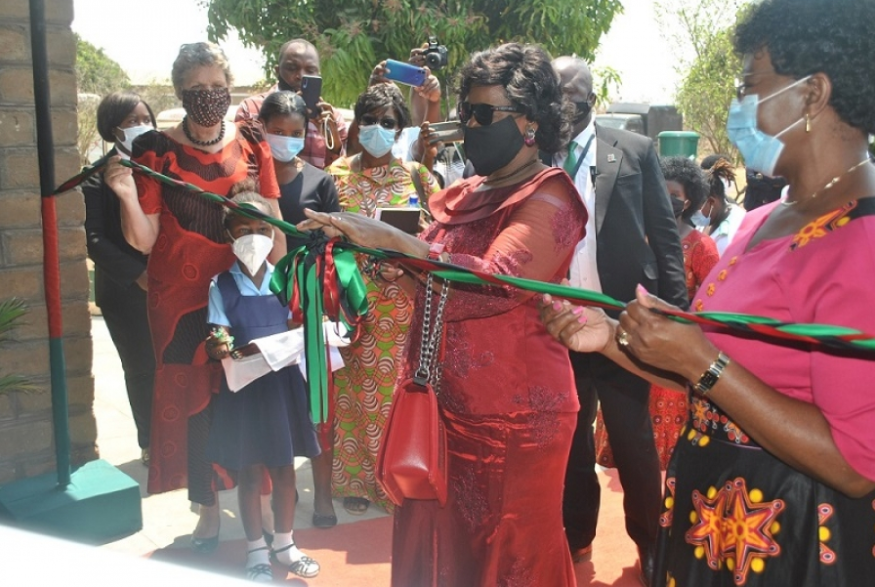 She commended Kouwenhoven, owner of health-oriented Eva Demaya Centre in the area, for constructing the school.

The school facility is comprised of two classroom blocks of two classrooms each, two hostels, one for boys and the other for girls, seven staff houses, office block, cooking shelter and storeroom among other facilities.

Madame Chakwera described provisions in the newly built school as an aspect that remains a big challenge to most schools in the country.

For the school facility to be beneficial, the First Lady urged mother groups in the area to encourage girls to go to school, saying the re-admission policy gives impregnated girls a second chance to realise their dreams.

“Much as there are some challenges that limit admission of learners to secondary schools, the primary challenge is shortage of schools,” she said.

Madame Chakwera donated 1600 face masks for the first cohort of learners at the school.

Minister of Education, Agnes NyaLonje said 80 per cent of boys and girls in the country complete primary education but only 15 per cent make it to secondary schools.

She said the school handed over to government on the day will promote education in the area, mainly for girls, noting that most of them have been victims of early child marriages due to lack of access to education facilities.

NyaLonje then announced that her ministry would provide 200 beds and mattresses and desks to the school, besides constructing a laboratory and library in the long run.

Paramount Chief Chikulamayembe of Rumphi, in whose area the new school is located, expressed his community’s gratitude for Kouwenhoven’s donation.

He, therefore, urged government to provide potable water and electricity to the facility (which is already wired for installation).

The chief further urged government to construct more teachers’ houses to supplement the seven that are part of the donation.

To sustain the facility, he urged the surrounding community to take care of it, saying it is an investment for more generations to come.

Jacqueline Kouwenhoven, who is Eva Demaya Centre founder and director, and former Rumphi West Parliamentarian, said the centre was launched in 1999 with focus on health care and has two clinics in the area.

She, however, said the organisation started diversifying its interventions to education.  So far, it has provided bursary to 400 leaners besides assisting to upgrade both primary and secondary schools due to the communities’ demand.

Luviri Secondary School, which has 160 boarders, lies on eight-hectare piece of land donated by a community member – a Mr. O.K. Kanyerere Gondwe. It has two classroom blocks with a total of four classrooms.