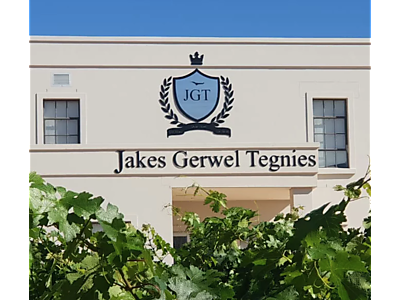 The story behind the Jakes Gerwel Technical School is a heartwarming one. It is a story about ubuntu; a reflection of what happens when people with a similar vision unite.
16 October 2019  Anneline Hlangani  0 Comment The story behind the Jakes Gerwel Technical School is a heartwarming one. (Facebook)

Phrases like "miracle school," "this happens when a community stands together," and “your model could change the trajectory of our country,” are ones that arise when people speak about the Jakes Gerwel Technical (JGT) School in Bonnievale.

The story behind this school is a heartwarming one. It is a story about ubuntu; a reflection of what happens when people with a similar vision unite.

Before the development and building of the JGT school, Bonnievale only had one high school with 350 desks, which meant many youngsters could not attend high school or had to travel to other towns.

Due to high traveling expenses, many would drop out of school, and it was this high drop out rate that inspired the hearts of a few local business owners who were moved to build a new school.

In 2016, a community team approached the Department of Education to discuss the building of a new school in Bonnievale. They were told to find land for the school and that the Department would provide only 40% of the funding.

Less than a week later, they returned with a plan.

Building started in June 2017 and by January 2018 the school was fully operational. Had it not been for the assistance of so many people, it would not have taken only six months to build a functional school.

"As a community, we prayed together, depended on one another. We had to be patient with each other, and we expected a lot of input from one another. On Saturdays, community members invested their time and effort in building the school," says Philip Jonker, a local farmer.

"They would come together to collect rocks on the site, get rid of the rubble and roll up the wire. People could also invest in a brick by simply paying R2,50 at the local supermarket," he describes.

Not only did the community help build the school, they also came together to set up the school curriculum.

"Parents were asked what they wanted the curriculum to look like. Employers in the community were asked what would help them if someone came to them after completing matric and asked for a job opportunity and that is how they decided the school should be a mainstream-technical school," says Curren Kuhn, a Bonnievale born engineer and JGE Funding Trust member.

Professor Jakes Gerwel is a role model for many of the school's students and founders: a son of farm workers himself, who grew up as one of 10 siblings in a small home, he is someone with whom many of the JGT learners can identify.

The school says they are very privileged that the Gerwel family supported their decision to name the school after the professor.

Professor Gerwel's son Hein Gerwel told Parent24 "I think the choice to name the school after my dad is a very great initiative. My dad was a person that firmly believed everyone deserves access to great quality education. Another upside is also that he had a very great friendship with Philip Jonker."

Renewed hope for the community "In Bonnievale, and in South Africa, we are sitting with a situation where 6 out of 10 children that start school do not finish matric. So, you already start with a challenge that 6 out of 10 children feel as if they are a failure because they don’t finish what they have started," says Wilhelm.

For many of the youngsters the existence of the Jakes Gerwel Technical School was a turning point in their lives.

Philip told us that community members smile when they say "our children are dreaming again, and they can envision the careers they would like to pursue."

Principal Albert Mocke told Parent24 "We are very excited about the future of the school. We have already seen a great improvement in the marks of the grade eights and nines."

"Many of the children come from a mainstream school background,"  he said, "and due to many factors they would often struggle academically. However, now that they have the opportunity to receive both mainstream and simultaneously receive technical education there is great development."

The school thought it would take a generation or two to see some change, but they can already see transformed lives, and I look forward to hearing many more wonderful and inspiring stories from the Jakes Gerwel Technical school.

What they have managed to do in their community is a strategy that we as South Africans can be inspired by to make our country a better place for ourselves, and the generations to follow.

The story behind the Jakes Gerwel Technical School is a heartwarming one. It is a story about...