Mwembeshi Boarding Secondary school is a role model for all schools in Zambia in terms of its agricultural production unit. 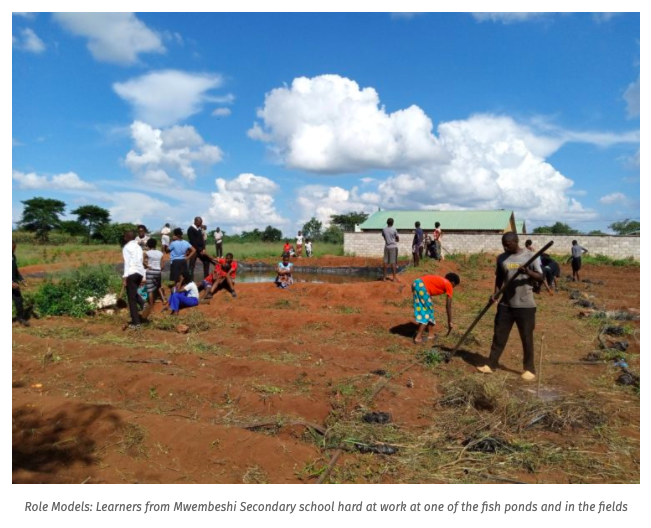 That is according to Dr. Jobbicks Kalumba, Permanent Secretary in the Ministry of General Education, who toured the school last month and stated that other schools should emulate Mwembeshi and take guidance from the school because it is performing so well.

Mwembeshi, one of the FutureLife-Now! schools in Zambia, is located in the rural area of Chilanga district in Lusaka province, 38km west of Lusaka city. It began an agricultural production unit in 2015 and the unit has achieved far more than its original aim which was to “feed the learners”.

At the outset the school produced only cabbage, but has grown and improved in leaps and bounds and today utilises about six hectares of land to grow crops on a rotation basis, (currently, tomato, maize, onion, eggplant, cabbage and rape). The school also farms fish and raises chickens. The produce is sold to local markets in Lusaka city and to the nearby community. Of course, produce also goes to the school’s boarding section for learners’ meals.

The school has 592 learners and the production unit is key in the school’s activities, as it has helped mentor learners in many areas, including academically, socially and professionally.

Learners are actively involved in the production unit’s activities, which helps them acquire and develop skills in growing crops, rearing chickens and fish farming, guided by the school’s agricultural science teachers.

The FutureLife-Now! programme has significantly assisted the school in many areas, including in the provision of water. “Water is regarded as a key player in our everyday life, hence improving the water system at the school was an important development,” said Padwell Habwato, FutureLife-Now! focal person at Mwembeshi.

In 2020 FutureLife-Now! helped the school install an additional borehole to overcome its seasonal water challenges. Thereafter the school was able to significantly improve its production unit, expand the size of the school garden, and create two active fishponds that can hold over 5 000 fish each. Added to that, sufficient clean water – essential for the running of boarding school – is now the norm.

He added that the FutureLife-Now! programme has helped him in other ways too. “FutureLife-Now! has helped me to know myself, and develop my abilities academically and socially. This is because of different lessons we receive from the youth facilitators on, for example, sexual reproductive health. I hope that this programme does not come to an end soon. May it continue to help future learners of this school. God bless the founders and funders of this programme.”

REPORT || What is a CSTL School, and How Do We Build Them?

The report includes a road map for planning to build and maintain a CSTL school. A CSTL school is a...

Dear Educators, The government of Zimbabwe (GoZ) together with the Food and Afri-culture...

Report Launched! | The Impact of Covid-19 on Young People and Adolescents in the SADC Region

The impact of COVID-19 will have an irreversible effect on progress that has been made if...

We are Keen to Go Green! | Zimbabwe’s Murape Learners Put Their Backs Into Greening Their School and Community

Youth participation in community development is one of the most effective ways to promote young...

What do boys and young men need? The best way to find out is to ask them! This is precisely...

Three days of intensive interactions has significantly strengthened the linkages between Lesotho’s...

Mwembeshi Boarding Secondary school is a role model for all schools in Zambia in terms of its...

Guide for Operationalising Care and Support for Teaching and Learning in Schools in the SADC Region Out Now!

This guide was developed by MIET AFRICA to guide SADC Ministries of Education and their schools in...