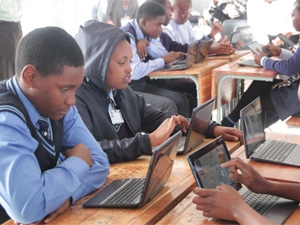 Vumatel has challenged other broadband providers to follow its lead and offer schools free fibre connections.

Vumatel is rolling out free uncapped open  access  fibre infrastructure to every school it passes during the deployment of its network.

The company says each school will be provided with a dedicated 1Gbps line and will be able to choose from a variety of Internet service providers (ISPs) for free uncapped Internet connectivity.

The ISPs currently on board include Cell C, Cool Ideas and Vox Telecoms. Vumatel expects others to join the initiative soon.

The company has already run a successful pilot with three Johannesburg schools − Greenside High, Hoërskool Linden and Parkhurst Primary − and the response has been "overwhelmingly positive".

It has started introducing fibre to additional schools and aims to provide free high-speed connectivity to approximately 80 schools this year, impacting around 65 000 learners.

"Our children are the future and it is vital that we connect them to the information age," says Vumatel CEO Niel Schoeman.

"We challenge other broadband providers to follow our lead and work together as the private sector in addressing one of South Africa's key challenges. The incremental cost for telcos to do this for schools are negligible when compared to the potential and fundamental impact it can have," he adds.

Vumatel says schools are lagging behind in the digital age because the cost of bandwidth has traditionally been so prohibitive.

"The systems in place at these schools will seem archaic to those in business who take connectivity for granted. It is ironic that in these educational facilities where access could make such an impact, it is so lacking."

The improved connectivity also means schools can migrate away from locally hosted services and move their systems into the cloud.

"Schools are financially constrained and cannot afford computer-trained IT professionals, infrastructure maintenance and hardware costs. Cloud migration will save time, effort and money, and these savings are made possible because we have fibre," says Pieter Hugo, parent and tech specialist on the governing body at Hoërskool Linden.

Parkhurst Primary principal, Sanjeev Maharaj, says the fibre connection has already had a massive impact on e-learning initiatives at the school.

The school uses the Click Foundation's Reading Eggs e-learning literacy programme and has found students are now able to get through more lessons much quicker than when the school had ADSL.

The majority of the learners at Parkhurst Primary are from Alexandra and Soweto, with the remaining children coming from the inner city and surrounding suburbs. Maharaj says access to the e-literacy platform is enriching in terms of English language education, as the majority of learners do not speak English at home.

"Without adequate connectivity none of this would be possible," adds Maharaj.

Vumatel says it is committed to moving South Africa forward and contributing to the objectives of the national broadband strategy, SA Connect. It says providing broadband connectivity to schools is one way in which the company is giving back to the communities in which it deploys its network.